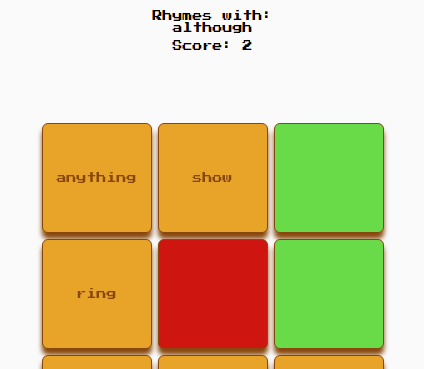 Finally! Back to my roots of language-based micromaterials!

During a perhaps unwise move to completely change stacks, deployment pipelines, and other fun technical stuff, my ability to work on new micromaterials like this slowed down for a bit, but I’m hoping to be back to adding to the growing list of examples available at grammarbuffet.org.

As a quick summary of the most important aspects of this shift, I’ve started deploying all the user-facing parts of the applications on to netlify. Definitely check them out if you’re interested in creating stuff that doesn’t necessarily need any database integrations.

Essentially, this is very much in keeping with the modular nature of the micromaterials approach, and allows the data and logic of a micromaterial to be separate from the user interface part. It’s been quite a shift from putting everything onto my own servers, but a welcome one, and a much more productive paradigm going forward.

…and now, back to the education part!

The basic structure of the app (which I borrowed heavily from this tutorial) is the user selects a word with the sound they want to practice rhyming: 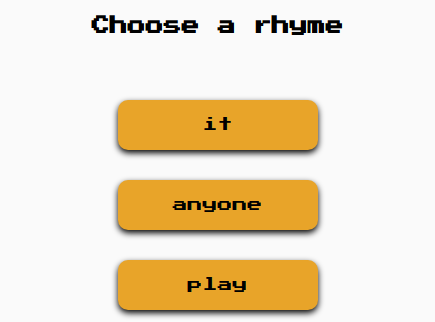 after that, they see a grid of 12 squares with words on them (6 of them rhyme, 6 of them don’t). The user needs to find and tap all 6 of the rhyming words to win. If 3 of the non-rhyming words are tapped, the game is over. That’s it.

All of the data for the words comes from the new general service list, which itself covers around 90% of the words learners are likely to encounter in general English (eg, not academic or specialist domains).

It’s therefore an incredibly useful list in terms of deciding what to focus on first. It also has the happy byproduct of giving us shorter words with more obvious rhymes (I’m not even sure how useful rhyming something with “economy” would be).

Things that could be better

Recently, there has been a growing appreciation that the entire world doesn’t benefit from unlimited data on a 4G connection. In a parallel to the movement towards creating mobile-first apps that target mobile screens and are then adapted to run on desktop screens, we now talk about offline first as a way to enhance the user experience in places with poor network connections and expensive data charges.

In terms of users who are interested in using online materials to study/learn English, there are many of them in parts of the world that do not benefit from fast wifi and unlimited data plans.

I’ve recently started auditing my existing micromaterials to see which can be upgraded to be offline first, and have had success with a few so far (both grammarbuffet.org and touchwords) are now fully available offline.

The short version of how we do this is using a technology called Service Workers to store copies of all the assets we need to download to run the app. Once that happens, and everything is stored, that Service Worker can just give us those instead of needing to download them again.

Using this paradigm, combined with user interfaces hosted on a service like netlify, the apps are extremely quick to download, and each usage after the first one doesn’t even need an internet connection.

The real power in this kind of approach to building and deploying micromaterial web apps is when we start developing the server-side systems that need database connections and things like that.

A true static web app like rhyme-game (we’re still workshopping that name…) could easily make a network request to get data from an API somewhere (like this one returning sentences from reddit) and use that as the datasource for the page.

In this way, we could reuse a server-side micromaterial as a data source for any number of web apps that want to do something with it. For example, with the API I just mentioned, we could use it to…

And once an ecosystem with different sources and consumers of micromaterials starts to grow, we’ll probably see stuff that’s much cooler than anything I could build on my own.

3 thoughts on “Rhyme Time (even offline)!”